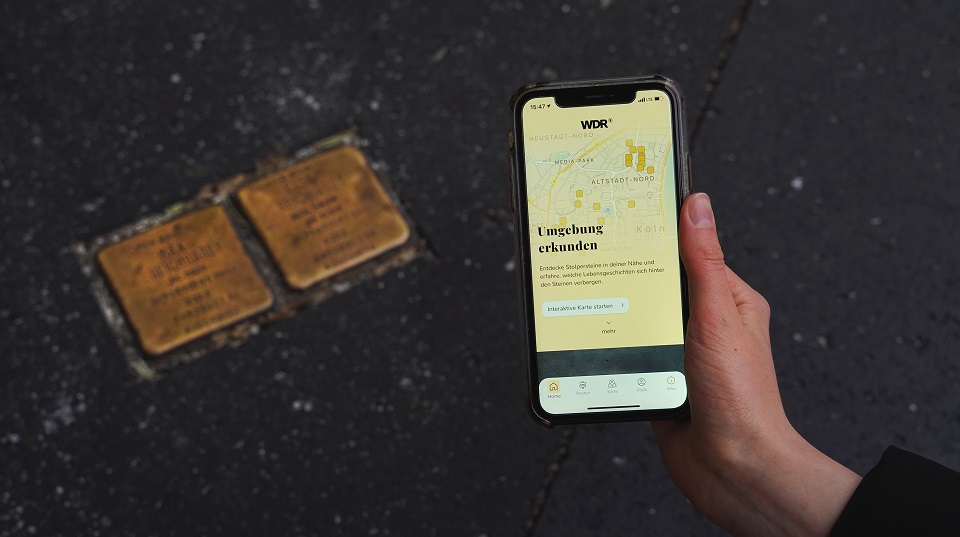 Created by public broadcaster WDR, the new app shows you – via an interactive map and an integrated GPS navigation – the locations of the 15,000 Stolpersteine commemorating the victims of the Holocaust in Germany‘s state of North Rhine-Westphalia

The app also suggests “routes of commemoration” in Cologne, Dusseldorf, Bonn, Aachen and many other cities in North Rhine-Westphalia.

The app tells the stories of these victims – their lives and tragic fates – in meticulously researched and written biographies, photos, and 1000 accounts of families’ fates. In German and English, these feature moving graphics and audio, and are available for common use.

Access to the victims is provided by a searchable database.

The app presents overviews of the Holocaust and its many forms of persecution, suffering and murder. This is tailored to the needs of educators and their charges.

Terry Swartzberg, the Munich-based campaigner for the Stolpersteine:

“Our ‘avoda’ – holy mission – of commemorating each and every victim of the Stolpersteine, of making sure that the entire world knows about the Shoah, and of its learning the Holocaust’s lessons just got a whole lot easier.

Speaking in the name of the victims’ families, of Gunter Demnig and his team at the Stolpersteine organization, and of those of the thousands of people who fund, research and place the Stolpersteine, I wish to express our heartfelt thanks to WDR, to its director general Tom Buhrow, and to project head Stefan Domke and his team, for having undertaken this pioneering work of digital-based commemoration.

I am proud to have served as a consultant to the project. Let me add a heartfelt toda raba to Yad Vashem – the World Holocaust Remembrance Center – for its participation in the project.”

Headed by Tom Buhrow, its director general, Westdeutscher Rundfunk is the public sector broadcaster for North Rhine-Westphalia and its population of 17 million. WDR forms part of the ARD national network.

Stolpersteine placed in Munich in 2021